A FEW WORDS ABOUT BRIAN Brian spent his first two months after his senior year with the Milwaukee Rampage. During that time he was allowed to try out for Wolfsburg in the 2 Bundesliga. He would spend one year there before moving back home and signing with the MLS in 1996. It may have been a short time in Germany but it gave Brian a great understanding of what it took to be a professional soccer player. In January of 1996 Brian became the first player ever to be drafted by Major League Soccer. MLS would be where Brian spent his next 8 years playing for the Columbus Crew. In the later part of the summer of 96 Brian would get his second call up to the USA Men’s National Team. During those 8 years he played in 2 FIFA World Cups becoming the first American to score at least one goal in back to back World Cups. He also went on loan to England twice. (Six months to Preston North End of the Championship and three months with Everton in the English Premier league) In January 2004 Brian transferred to Fulham Football Club of the English Premier league permanently and would spend four and a half years with the club. In 2006 Brian played in his third and last World Cup. Retiring for the Men’s National Team after the last game of the Tournament. In the following two seasons Brian would be voted the Fulham Player of the year. It would be the first time an American would be receive the award in back to back seasons at a top flight European club. In 2008 Brian moved back to Arlington Heights and signed with the Chicago Fire of the MLS. In the summer of 2008 Brian captained the United States Olympic team in Beijing. At the end of the 2010 season with the Chicago Fire Brian officially retired from professional soccer. During his career he was captain for at least one year for each of the professional teams. He now is an analyst and color commentator for FOX Soccer Channel. He is considered to be one of the best strikers the USA ever produced, as well as the best header of the ball. Here are some of his individual accolades during his career. 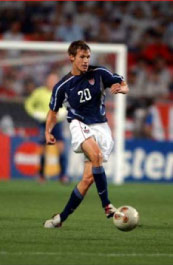